A review of A thousand brains by Jeff Hawkins 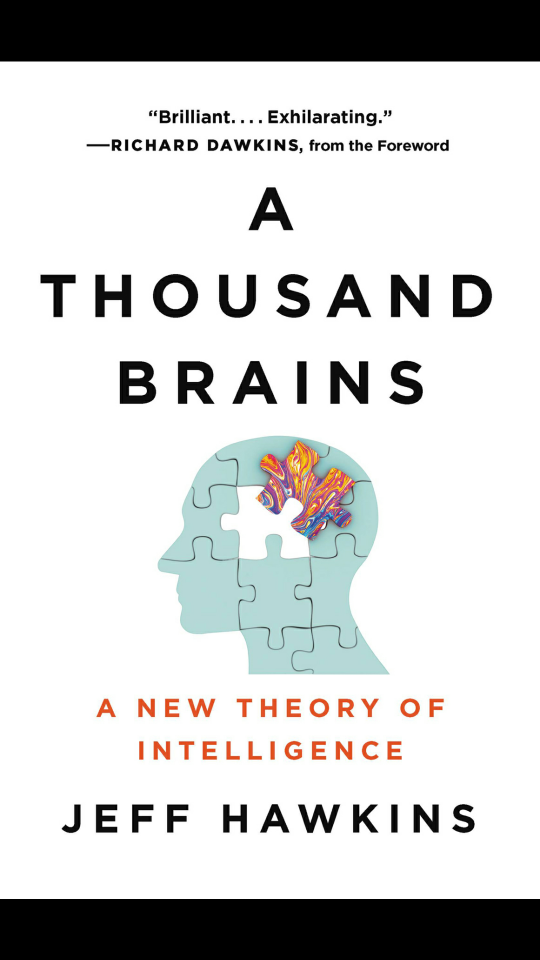 Brains and nervous systems are the most exciting and truly weird topics to discover.

They can be approached through neuroscience, ethology, psychology, cognitive science, arts, brain-inspired computing, and bio-inspired robotics.

Or, even in some other ways. Easy, because our own brain and CNS is involved in all our perception and acquisition of knowledge. It is involved in everything we are and do. It is us, and it is bodily (somatic) all the way down. This is called embodiment.

Anyway, bla bla. Just finished reading “A thousand brains” by Jeff Hawkins, who you might know from Numenta, their papers, or from the earlier book “A new kind of intelligence”, which I haven’t read.

The work presented and discussed in the book is about the human neocortex, its computational mechanics, and its principles of organization.

What the brain does, in general, is to create models of the world, which it then uses to make predictions and find ways (sequences of actions) to get to goals (usually related to survival, in the broad sense of the complicated life’s of contemporary humans). This is called inverting a model.

In the book, the idea that these internal models don’t come in singular, but rather in a massively large bundle, a huge flock of models, is expounded and illustrated in clear and fun prose, including some pictures.

One of the weirdest things about the brain is the modelling decomposition. Sorry. I just love that word so much.

What is decomposition? I don’t mean the degenerative one. It is meant in the mathematical sense of decomposing something complex into a set of simpler things, together with an explanation of their interactions, so that the overall story will yield the original phenomenon.

Most of us will have an acquired and consciously accessible decomposition of the world in our heads, called a mindset. Usually that’s objects, persons, domains; interactions come via force and gravity, light, sound and touch, inner focus and sociality, etc;

So the cool thing that the brain does, is a) to decompose the world into a soup of models, and b), that this decomposition is mostly and unconsciously completely different and utterly alien to our own introspective thinking. It just doesn’t align. No, it doesn’t. The objects of conscious introspective thought are just the tip of the iceberg, of all unconscious mental and neural activity, not available to introspection.

One of the reasons that this is so is somatics, properties of a physical body that needs to compute in a physical universe, governed by energy equations, metabolics, and distribution networks. Limitation as a resource. Work that.

The story of the relationship between the subjective introspection experience of feeling and living, and objective neural mechanics is one of the most pressing issues in science communication.

Why? Because understanding our own behavior and decision mechanics is essential for our civilization to survive the 21st century. Period.

Hawkins’ book throws a lot of stepping stones out into our path through a foggy toxic lava swamp. Highly appreciated and recommended.