2022-04-02 Updating this list by way of updating my cv, adding most recent releases and adding more direct links.

2021-01-17 Update from another thread, over the years I have accumulated so many aliases that I lost track myself. Still picking up the threads, there is progress though.

2020-12-25 Coming back to this after two years since writing the first draft I remember the original motivation. I needed to get an overview on all published music I authored to get the royalties sorted. Project backward and the availability directive sprang from this. 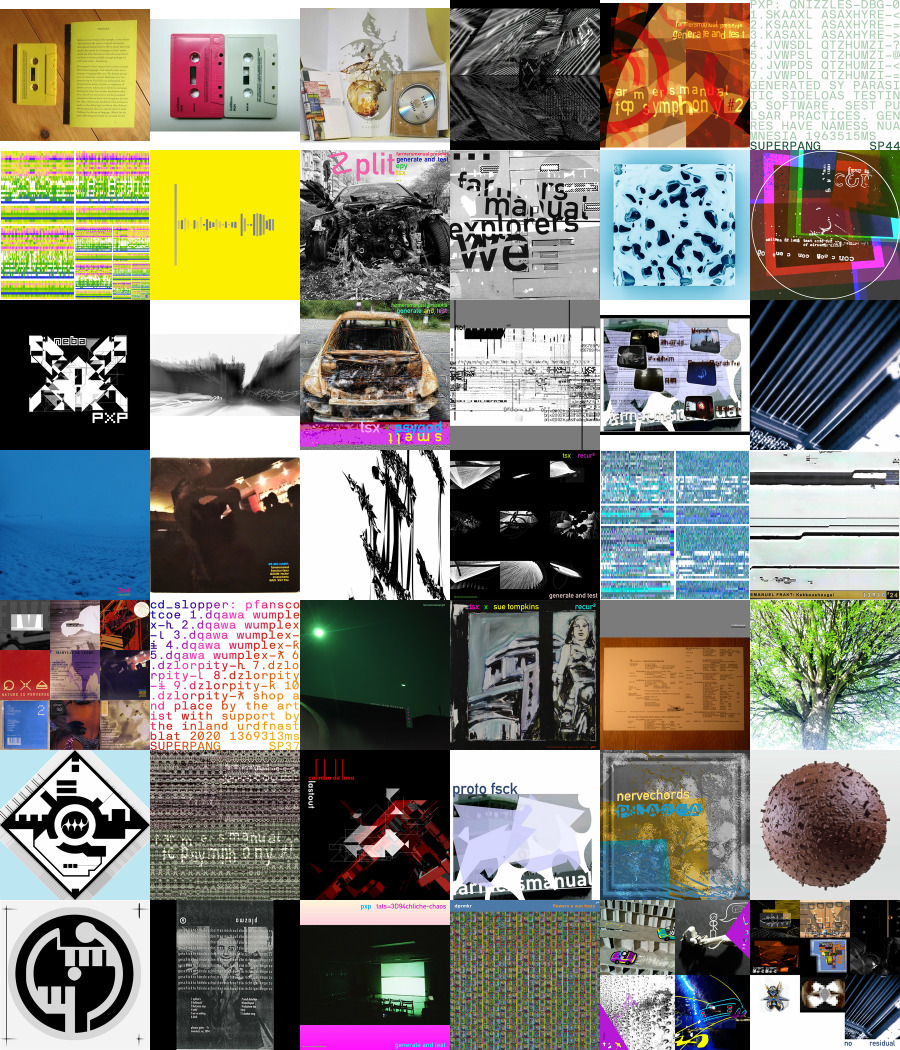 Not showing specific musical talent during childhood, Oswald’s creative audio life starts at age 6 or so with the production of nonsense podcasts together with his brother ub using a microphone and the tape recorder of their parents’ stereo. Later on, playing the guitar had to be learned to fulfil on a band founded earlier with the homies klaus, grt, and tomi. After some changes in setup and name, the band was plazma, a unique outfit by any measure. plazma produced two full-length albums and seven tons of session recordings. All self-produced at low budget, practicing creative engineering and effective self-organization. Both albums were self-published on tape in 1993 and 1994 as limited tape editions.

Separate story to be filled in at another time. In the meantime please check up all of farmersmanual’s music on bandcamp and find more information on wikipedia, discogs, the fm website, the recent live archive (BROKEN) or the internet archive. We are on Twitter with @farmersmanual_, Insta w/ @farmersmanual, FB etc. Please write in at any time and leave a like or a comment.

Working together with Florian Hecker we came up with cd_slopper thinking it to be a good name for our joint activity. At the time we were deep in exploring codecs and manipulating audio on the level of non-PCM codecs. The frame structure used in MP3 is aesthetically very close to grain based synthesis. This became an interesting set of relations to sample from and work with.

Shortly after work on cd_slopper was started, we built a new version of the MEGO sublabel falsch and launched it under the fals.ch domain, heroically conserved by the @internetarchive on fals.ch archive. The idea was to be a digital content provider (aka netlabel), build a random but unique self-referential and novel digital style, and implement the organization of the label as a digital process itself. Curiosly, the first version of the website was written in perl using Ted Nelson’s ZigZag(tm) structure as a backend database and custom frontend code. In the second iteration, a LAMP implementation of a similar mechanism was used, getting up to speed with developing web technologies. It allowed online manipulation by editors directly via the website, CMS and so, uuh!

All of this proved to be creatively fruitful and a lot of fun. Economically it was not even unsuccessful due to our outright art-pour-l’art approach, aka business naivity, but did not carry. The label released about 50 packages of cutting edge audio-visual content by an illustre set of both acclaimed and upcoming artists, united by the their quest for truly innovative approach in media design, technical and aesthetic identity. The discography includes two tangible physical releases, each a CDROM sampling the catalogue at 25 (fb25) and 50 (fb50) releases.

fals.ch has been successfully reanimated from cryo sleep in or about 2019. the domain is live again and points to a reconstruction of the back catalogue. new release scheduled and upcoming.

Picking up fm’s obsession with sonification and real time data-driven synthesis and composition approaches, Gullibloon was conceived as a double identity of software project and music author, building all of their pieces on real time data feeds collected from virtual and physical sources. Tapping processes such as network traffic, computer activity status, various sensors and algorithmic generators. They can be found on the web.

Been creating an amount of synthetic persona over time that makes myself dizzy at times. These persona including Calimba de Luna, dprmkr, pxp and tsx, to name just a few. They are all listed in the musicography table at the beginning of this page.

Here is a clipping from the Chicago Reader by Peter Margasak from 27 Nov, 2003 published in the run-up to the first and so far only live appearance of pxp

There are few practitioners of electronic music more challenging than the Austrian group Farmers Manual. Their music draws on the vocabulary of club music–pulsating bass lines, frantic drum ‘n’ bass and techno beats, modem handshakes and digital glitches–but embeds these elements in a new and alien grammar. Their long, apparently improvised streams of digitalia are at times grating and self-indulgent, but at its best their work is densely layered with arresting details and packed with abrupt and exciting shifts in texture and rhythm. They recently issued a mind-boggling DVD-ROM entitled RLA (Mego; it stands for “recent live archive”) containing more than 70 hours of audio produced at performances and gallery installations since 1995. The additional 70 minutes of electronic abstraction on While(p)”print”.”,” “x$p++” (Wavetrap), a recent solo album by group member Oswald Berthold (working as PXP), are by turns harsh and serene, viscous and brittle. For his Chicago debut, Berthold will present a new piece called “Tats=3D94chliche-Chaos,” which depends in part on what he calls “distributed online automated entities” that kidnap random packets of data from the Internet and turn them into sound–working, according to Berthold, “like virtual players in a virtual little band.” There will be a visual component to the performance as the same data is simultaneously translated into pixelated animations. Berthold’s work strains the conventional definition of music to the breaking point, but between the range of the sounds he creates and the mystery of the underlying methodology, there’s plenty here to sink your teeth into. Saturday, November 29, 9 PM, 6Odum, 2116 W. Chicago; 773-227-3617 or 312-666-0795.